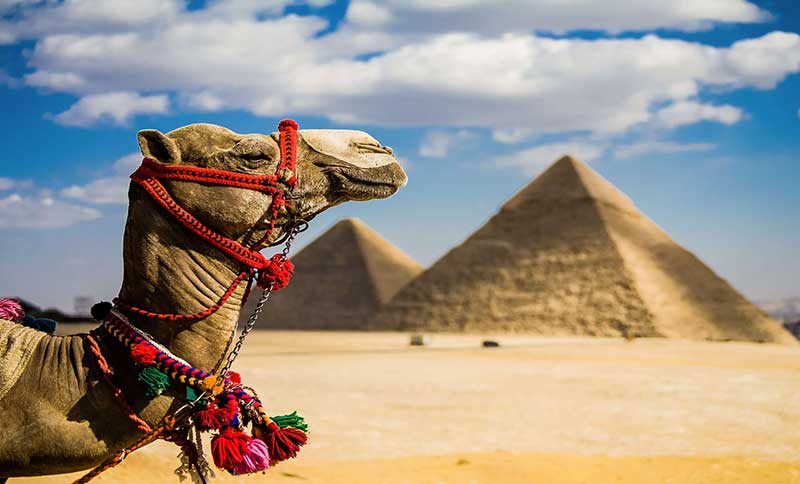 You’ll start with The Egyptian Museum , the largest museum in the region. It houses more than 100,000 original pieces of antiquities that tell us about the lives of the pharaohs and ancient Egyptians.

Then you’ll visit the Three Majestic Pyramids of Kings; Cheops, Chephren, and Myckerinus guarded by the human-headed, lion-bodied the Sphinx .

After you take your breakfast in the morning, check-out so we can start our holly visits, the destination for the day is Minia.

Upon arriving you’ll visit The Church of the Holy Virgin in Gabal el Teir means Mountain of birds. It consists of five churches, including the ancient church where the Holy family rested in the cave inside it.

We will drive south again to Asyut to visit Gabal (mount) Quaskam, where lies Deir El Moharraq meaning the burned Monastery. It is one of the oldest monasteries in the world. The Holy family stayed in it for six months in the cave that became the altar of the old church of the Holy Virgin at the west of the Monastery.

We will keep going south to Gabal Asyut, which is known as Gabal Dronka, where the return journey started. They built a convent of the blessed virgin on the Mountain to commemorate the location.

You’ll have lunch during the visits. After that, you’ll check-in at a hotel to spend the night and have dinner.

You’ll visit the White Monastery (El Deir el abyad). It is also known as Monastery of AnbaShenouda or St. Shenoute Monastery. It is called white due you to its clear limestone walls. It is one of the oldest Coptic monuments in Egypt built on the ruins of a Pharaonic city.

You’ll move on with the bus trip heading to Abydos first to visit the Temple of Seti I, the most impressive religious structure still standing in Egypt.Seti I was the father of Ramesses II, who overshadowed him. The temple was dedicated to Osiris.

Then you’ll head to Denderah, where you’ll visit Horus Temple.

Upon arrival, you’ll check-in to a hotel and spend the night.

Valley of the Kings, where the collection of the most famous underground tombs lies, of the greatest pharaohs.

Valley of the Queens, where the wives of the pharaohs were buried, it was known then as Ta-Set-Nefru that means “the place of beauty.”

Hatshepsut Temple, located at the Cliff of El Deir El Bahari, is designed by her architect Senmout at a very special place surrounded by the Mountain.

The Two Colossi of Memnon, the two massive stone statues of Amenophis III, the only remains of his funeral temple that these statues used to guard.

Then Luxor Temple, which was used as a place of worship, was founded by Amenophis III and later added to it by Ramses II .

Edfu Temple , dedicated to god Horus the falcon, the son of Isis and Osiris, it was built in the Ptolemaic kingdom.

Kom Ombo Temple , a double designed temple because it is dedicated to two gods, Sobek, the crocodile and the god of the sky, Haroeris.

Back to the ship to sail to Aswan , all the meals will be served.

Good morning, don’t forget to eat your breakfast at the Nile Cruise before you go and check-out.

You’ll catch your flight from Aswan to Cairo.

Upon arrival , You’ll head to Wadi Natroun by bus to visit the monasteries.

Anba Bishoy Monastery, founded in the 4th century, the two bodies of AnbaBishoy and Paul of Tammah lie in there.

St. Mary Monastery El Syrian, 500 meters away from the previous one, is dedicated to Virgin Marry and carries her name. The exact date of the foundation is unknown, but most sources agree on the 6th century.

Take a train across Egypt, from Cairo to Aswan, to get a glance over a great history. This country has been the seat of civilization for more than... [Read More]

Egypt is full of cultures and flavors; this trip presents you with a unique taste from the Pharaonic times. Have the best experience through... [Read More]