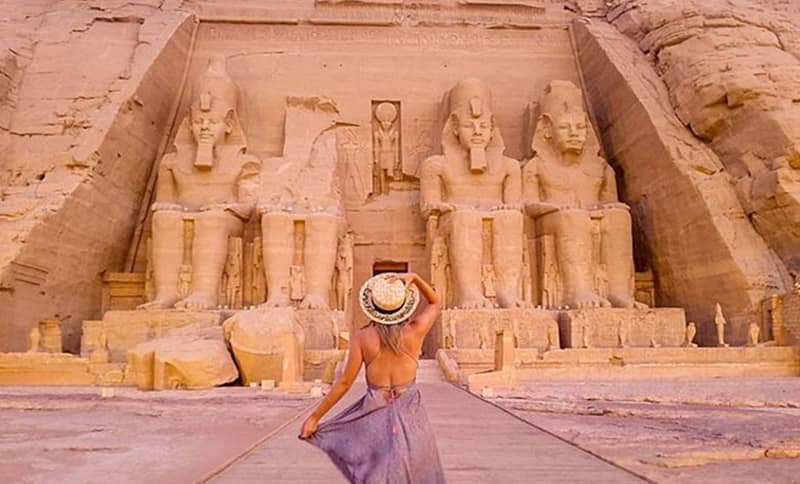 A trip that will make you amazed in every way. From seeing one of the Seven Wonders of the World to the temple that is aligned with the sun to serve its purpose. The Pharaohs never failed to blow our minds!


You’ll get to tour the Capital, then exploring historical Luxor where you’ll see an ancient architectural masterpiece, then driving to Aswan to visit the famous Abu Simbel.


Egypt won’t fail to amaze you in this trip!

Upon arriving at Cairo International Airport, our representative will meet you to assist you through customs formalities.

Afterward, you’ll be transported to the hotel to check-in while you enjoy your welcome drink. Have a lovely evening.

Ready for a city tour in the amazing Capital? Check-out from the hotel, and let’s go.

The first stop in the tour is the Egyptian Museum; it is the only museum in the world that is dedicated to only one civilization; it also houses over 100,000 pieces of original antiquities.

Next is even more majestic stop; it is one of the Seven Wonders of the World, guess you know what it is. The Three Pyramids of Giza were built by the three Kings Cheops, Chephren, and Mykcerinus, and guarded by the famous Sphinx.

Time for some shopping, not the usual type. You’ll go to the open bazaar of Khan El Khalili that lies in the heart of Islamic Cairo since the 15th century.

After you finish the souvenirs shopping, you’ll be transferred to the railway station to take the overnight train to Luxor, where you’ll have your dinner as well.

As you finish your breakfast on the train, you’ll be arriving at Luxor, where you’ll find our representative waiting for you.

You’ll be transferred to the West bank to start the visits.

The Valley of the Kings, where the most famous collection of underground tombs lies, it is also known by “The valley of gates of the Kings.” You’ll see some of these tombs from inside; some are colorful and still keeping their colors even after so many years. The Pharaohs were great, indeed.

The Temple of Queen Hatshepsut, the Queen who crowned herself pharaoh of Egypt, the temple is considered one of the most temples ever. It was founded by her architect Senenmut in an extraordinary place surrounded by the mountain.

Two colossi of Memnon, they are the guardians of a mortuary complex that used to exist behind them. The two stone statues belong to Amenophis III.

After exploring the west side, you’ll go to the eastside to check-in to the hotel and have some rest.

In the afternoon you’ll explore the attractions of the eastside, starting with Karnak temple, it was a place of pilgrimage for nearly 2,000 years, it was dedicated to Amen, Mut, and Khonsu.

Lastly, you’ll visit the Luxor Temple; it was first built by Amenophis III then completed by Tout Ankh Amen later Ramses II. There is a shrine dedicated to Alexander the great toward the rear.

Drive back to the hotel after this long day. Goodnight.

After breakfast, you’ll check-out from the hotel. Then you’ll drive to Aswan about 215 Km away from Luxor, but first, let’s make a couple of stops.

You’ll visit Edfu Temple, one of the best-preserved temples. It is dedicated to the god of sky Haroeris, the falcon.

After that, you’ll make another stop at the unique Kom Ombo temple that was built in a double design in dedication to two gods, Haroeris and Sobek, the crocodile.

Then continue driving till you reach Aswan and check-in to the hotel.

You still have the rest of the day to explore Aswan like a local, the Nubians there are the kindest people ever, enjoy the tour.

Good morning. Ready for visiting the greatest temple of them all?

You’ll depart from the hotel and drive to the great Abu Simbel temple, about 270 Km away; it will take 3 hours to reach there, totally worth it!

Abu Simbel temple was built by the great Ramses II; it was relocated after building the high dam of Aswan into this current location to save it from being submerged. It is aligned in a way that the sun shines directly on the statue of Ramses II on his birthday and the day of his coronation. You’ll also find a smaller temple which he built for his wife, Nefertari.

After wandering in the temple and knowing stories about it from the tour guide, you’ll drive back to Aswan.

Get ready for another magical experience; you’ll ride a Felucca on the Nile between the Elephantine islands. Have fun!

After that, you’ll go back to the hotel to have some rest. Goodnight.

After finishing your breakfast, check-out from the hotel, but you are not done yet from Aswan.

First, you’ll visit the High Dam of Aswan, which was constructed in the late ’80s of the 20th century, to prevent the flooding of the Nile, producing behind it Lake Nasser, one of the largest human-made lakes ever.

Then you’ll take a motorboat to Agilkya Island to visit Philae Temple; it was moved to this island to rescue it from being submerged after building the dam. The temple was dedicated to the Goddes Isis and built by Taharqu.

Afterward, you’ll be taken to the Aswan railway station to take the sleeping train back to Cairo.

You’ll spend the night on the train and enjoy your dinner.

As you finish your breakfast on the train, you’ll be arriving at the railway station.

Our representative will meet you and take you to the hotel to check-in.

You have a free day at Cairo, you can enjoy the Capital on your own, there is so much you can do and a lot to see, so use your last day in Egypt well.

After breakfast, you’ll check-out from the hotel to be transferred to Cairo International Airport to fly back home.

We enjoyed having you and we hope you had fun with us as well.

Dive deep into Egyptian history on one of the best Egyptian tours, 11 days to go through the most precious spots you could wish for, knowledge and... [Read More]

This trip will give you the opportunity to combine between leisure and history. A Nile cruise between Aswan and Luxor will show you the greatness of... [Read More]