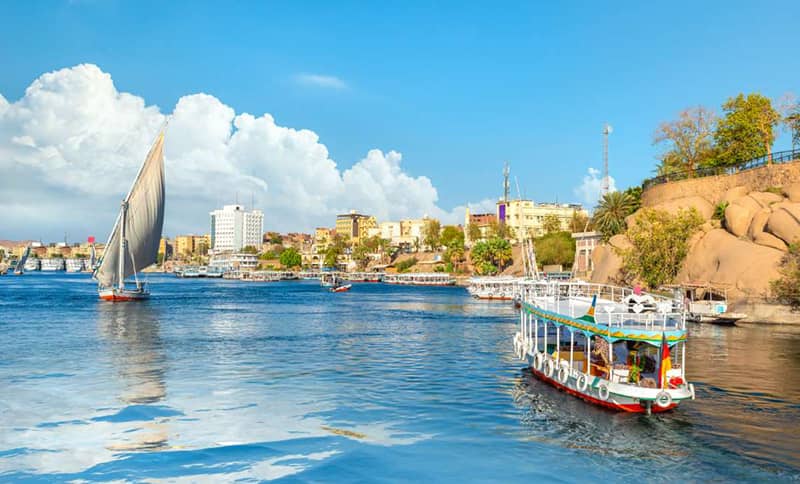 A historical trip that will take you through a journey back in time, exploring different cultures from different ages, all in one country.


The trip will start with two days of a full-city tour in Cairo, then flying to Luxor to take a Nile cruise to Aswan, enjoying a magical cruising in the Nile, with historical stops in between.

Upon your arrival at Cairo International Airport, our representative will be waiting for you to assist you through the regulations.

You’ll be transferred to the hotel to check-in while enjoying your welcome drink. Then have a goodnight.

Good morning. Have your breakfast, and then be ready to start our tour.

The best way to start is with The Egyptian Museum, the largest museum in the region. You’ll find more than 100,000 pieces of history that tell us about the greatness of the Pharaohs, including the famous treasure of the boy-king Tut Ankh Amen.

Time to go forward in time to a recent era to Salah El Din Citadel, built in 1176 by Salah El-Din himself, the founder of the Ayyubid dynasty during the Islamic period, was the seat of the government for more than 700 years. You’ll find Mohamed Ali Mosque in the same area, an Islamic architectural masterpiece that was built in the 19th century.

Then we will go to the center of old Islamic Cairo, to Khan El Kahlili, where you can take a walk in the historic open bazaar and buy souvenirs.

Enjoy your breakfast; we have another full-day city tour planned for you.

The Great Pyramids, one of the Seven Wonders of the World, they age more than 4000 years old, and they are tombs of the 3 Kings, Cheops, Chephren, and Mycerinus, guarded by the famous human-bodied, lion-headed Sphinx.

Memphis, It was the seat of the government and the most powerful city but now in ruins. The Ancient Egyptians called it “Nefer,” and the Greeks gave it its current name.

Sakkara Complex, where you’ll find the first pyramid ever built by king Djoser, also known as ”the Step pyramid,” designed by the architect Imhotep and made in the 27th century BC.

Return to the hotel to have a goodnight.

Start the day early, check-out from the hotel, and we will take you to the airport to fly to Luxor.

Our representative will meet you when you arrive and take you to the Westside to explore its major attractions.

The Valley of the Kings, the gateway to the Afterlife. You’ll find more than 62 tombs that have been discovered so far. You can explore the graves of the greatest Pharaohs from inside.

The Temple of Queen Hatshepsut, the Queen who crowned herself pharaoh of Egypt, the temple is considered one of the most temples ever. It was founded by her architect Senmout in an extraordinary place surrounded by the mountain.

The two Colossi of Memnon, two enormous stone statues of Amenophis III of the 18th Dynasty, facing toward the Nile. The only remains of king Amenophis III funeral temple.

Back to the east to check-in to the Nile cruise and enjoy your meals.

Enjoy your breakfast, then depart to explore the eastside.

First, visit The Great Temple of Karnak, the largest religious building ever was built gradually over the centuries, beginning from the Middle Kingdom and continued into the Ptolemaic period. It is dedicated to god Amen.

After that, visit Luxor Temple. It was always used as a place of worship throughout the ages, built by Amenophis III, and later added to it by the great Ramses II.

Back to the ship to start sailing to Edfu via Esna Lock.

Enjoy your meals on board.

Enjoy your breakfast, and then leave the ship to visit Edfu Temple, built in the Ptolemaic Kingdom, dedicated to god Horus the Falcon, the son of Isis and Osiris.

Back on board to enjoy lunch while sailing to Kom Ombo.

Visit Kom Ombo Temple, which was built in a double design dedicated to two gods, Haroeris, the Falcon, and Sobek, the Crocodile.

Return to the boat to enjoy your dinner and spend the time.

You’ll start sailing to Aswan first thing in the morning while you enjoy your tasty breakfast.

Upon arrival, visit the High Dam, Constructed in the late ’60s of the 20th century, it is considered new, but its importance is gold as it protects Egypt from floods.

Next, visit Philae Temple that was rescued and moved stone by stone to Agilkia Island, a complicated process that took years to accomplish. It was built by Taharqu, dedicating it to the Goddess Isis.

In the afternoon, we will take you on a Felucca ride around Elephantine Islands.

Don’t miss your meals on board. Goodnight.

Enjoy your breakfast on board before you check-out.

You’ll be transferred to Aswan Airport to fly back to Cairo.

Upon arrival, you’ll be transported to the hotel to check-in and have a lovely night.

Have your breakfast, and say goodbye to Egypt. You’ll be transferred to Cairo International Airport to fly back home.

It was our pleasure to have you, and we will be pleased to have you again.

Who said traveling through time isn't possible? In Egypt, everything is possible; this trip will make you feel that you are going through ages and... [Read More]