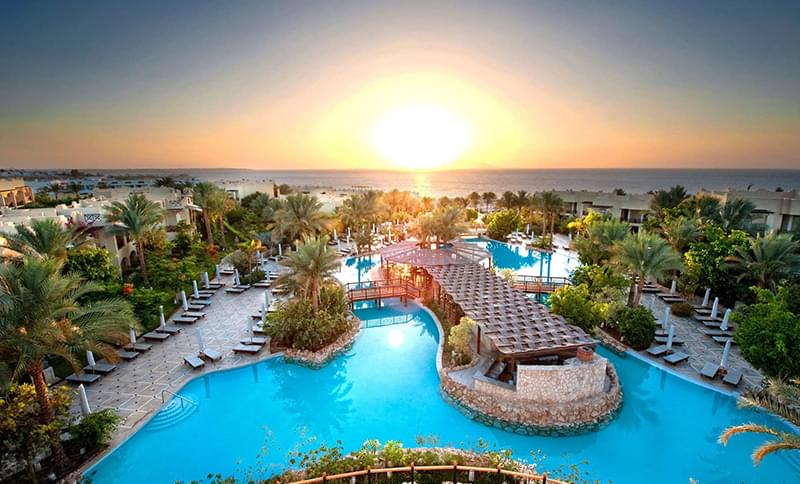 Two weeks of greatness all over Egypt.

Land in Cairo and discover its beauty, then have a little adventure at Saint Catherine after climbing Mount Sinai. Then explore the beautiful maritime life at Sharm El Sheikh and enjoy the sun and sea, then have a Nile cruise between Luxor and Aswan before visiting Alexandria and its spectacular sea view.

Welcome to Cairo, your gate, an unforgettable experience. At the Airport, you'll meet our representative who'll help you through passport control.

Then you'll be transported to the hotel, check-in while having a welcome drink.

Breakfast at the hotel; charge your energy for a full-day tour.

While in Egypt, The Great Pyramids Of Giza is a must-visit spot; you'll be stunned by how huge they are, the height of the biggest and the oldest one is near to 150m, named Cheops after the King who had built it, Chephren and Mykerinus are the two huge pyramids next to it. And then look at the noseless statue called Sphinx, which has the body of a lion with a human head.

Then visit the ruins of Memphis, the oldest capital of Egypt, founded by the Pharaoh Menes, who was also the founder of the Early Dynastic.

Visit Zoser Pyramid, also known as the Step Pyramid, the first pyramid ever built, located at Sakkara Complex, built in the 27th century BC during the Third Dynasty.

Back to the hotel and have a good night.

Good morning. Have a delicious breakfast at the hotel.

Proceed the series of your visit by The Egyptian Museum, containing more than 100,000 pieces of antiquities, telling stories about Egyptian History, and the treasure of King Tut Ankh Amen will catch your eyes.

Then move forward to another area from another Era, Salah El Din Citadel, built by Salah El-Din himself in 1176. It had been developed by several subsequent rulers. It was the seat of government in Egypt and the residence of its rulers for nearly 700 years from the 13th to the 19th centuries. And also, it's where you can find Mohamed Ali Mosque, built in the 19th century by Mohamed Ali Pasha, that will amaze you with its magnificent Islamic architecture.

Then go deep into the heart of the old districts of Cairo by a walking tour in Khan El Khalili open market, where you can buy yourself a nice souvenir.

Back to the hotel and have sweet dreams.

Early morning wake up and breakfast, then check-out from the hotel.

Depart to Saint Catherine by bus (about 480 km) where you'll find Mount Sinai, also known by Mount Moses, going through Ahmed Hamdi Tunnel passing under the Suez Canal to connect Sinai with the rest of Egypt.

Upon arrival, check-in at the hotel and have dinner. Get yourself ready for an upcoming adventure tomorrow.

If you want to witness something special, you have to get up early before even sunrise. Climbing Mount Sinai is the main activity for this morning. Its height is 1,586 m. When you get to the top of the mountain, you'll witness a superb view, especially at sunrise. It's believed that this is the mountain where Moses was able to speak with God in the Jewish, Christian, and Islamic beliefs.

After descending, you're going to need a good breakfast full of calories to make up for what you lost, then check-out from the hotel.

Before leaving, visit Saint Catherine's Monastery, built between 548 and 565 AD, the monastery is one of the oldest working Christian monasteries in the world, and it was declared as a world heritage site by UNESCO.

Transfer to Sharm El Sheikh. Check in at the hotel, and enjoy your day.

Good morning, have your breakfast, and wear your swimsuits.

Enjoy the sunny day on the beach, get tanned, and enjoy a swim between the fish and all the spectacular maritime life.

Enjoy all the water activities, with the possibility of a yacht day trip for snorkeling or diving.

Enjoy another day of leisure.

A lot of activities could be done, don't miss a snorkeling session, or maybe go diving with a pro for more details; you'll admire the colors down there.

Good morning, have your breakfast, and then check-out from the hotel.

You'll be transported to Sharm El Sheikh Airport to take a flight to Luxor, or via Cairo.

Upon arrival, you'll visit The Great Temple of Karnak, 2000 years of construction from Senusert I till the Ptolemaic period. It has a hypostyle hall forming a maze; you can get lost between these 134 columns. This temple was dedicated to God Amen.

Then you'll be transported to the boat cruise, where you'll enjoy a great way of accommodation for the next few days, check-in, get some rest, and spend the night.

In the morning, have your breakfast on board, charge your power for the upcoming day.

Start your tour by going to the west bank, where you'll find the top attractions of the city.

Temple Of Queen Hatshepsut, located beneath the cliffs at Deir el-Bahari, this mortuary temple was dedicated to Amun and Hatshepsut, the design of the architect Senmout will catch your eyes.

The two Colossi of Memnon, two massive stone statues of the pharaoh Amenophis III, who reigned in Egypt during the Eighteenth Dynasty. That's all we have now from Amenophis III funeral temple that had been destroyed right after construction 1200 BC.

Back to the boat, enjoy lunch while sailing toward Edfu, passing by Esna Lock.

Have your dinner on board. Have a good night.

Breakfast on board and get ready for the next exploration.

First visit for today is to Edfu Temple, which was built in the Ptolemaic Kingdom between 237 and 57 BCE. It's dedicated to god Horus, one of the most known gods in Egyptian mythology, symbolized by a Falcon as a god of the sky.

Back on board for lunch and some rest.

Then go back to your lovely boat, where you can enjoy a nice dinner and relax, have sweet dreams.

You'll be sailing to Aswan, from early morning, have breakfast, and enjoy the view.

There are a couple of visits waiting for you in Aswan.

The High Dam, built to protect from floods and became now the main source of electricity in Egypt. Keeping behind one of the biggest man-made lakes in the world, Lake Nasser.

Philae Temple, a temple saved from inundation of the Nile waters by UNESCO, moved from its original island to Agilkia Island. This temple is dedicated to goddess Isis.

Back to the boat for lunch and some rest.

In the afternoon, experience a Felucca ride between the Nile Islands, enjoy the nice weather during sunset.

Then back to the boat, have a nice dinner on board, and have a good night.

Weak early, have a quick breakfast, then check-out from the boat and head to the Airport, take a flight back to Cairo.

Upon arrival, move to the hotel, check-in, and get some rest.

Another time in Cairo, but have you covered it yet? You have a free afternoon to go through its streets and attractions as a local by yourself. Enjoy your time, but don't get lost.

After having your breakfast, check-out from the hotel, and you'll be on your way toward Alexandria. Created by Alexander The Great 332 BC.

Upon arrival, check-in at the hotel, get some rest.

Enjoy a free afternoon; you can have a walk on the coastline and enjoy such a view during the sunset.

In the morning, have a nice breakfast at the hotel to charge your power and then check-out from the hotel to start your journey.

This city was the source of knowledge, literature, and philosophy for almost 1000 years; it was the world's 1st destination and the most civilized city during the Hellenistic, Ptolemaic, and Roman periods. So let's start the city tour.

visit Biblioteca of Alexandria, it was built as a commemoration of the old library that was lost, where you can be able to access millions of books from different countries around the world in different languages.

visit Kom El Shoqafa Catacombs, series of Alexandrian tombs, statues, and archaeological objects of the Pharaonic funeral cult with Hellenistic and early Imperial Roman influences, which had been rediscovered accidentally by a donkey in 1900.

visit Citadel of Qaitbay, established in 1477 by Sultan Al-Ashraf Sayf al-Din Qa'it Bay to be a defensive fortress, with its unique location at the entrance of the eastern harbor on the eastern point of the Pharos Island.

visit Montazah Palace, walk into its gardens, this palace was built as a hunting lodge and residence for Khedive Abbas II and his companion in 1892.

Then drive back to Cairo, check-in at the hotel, and have a good night.

Good morning, have your breakfast, then check-out, and you'll be on your way to the Airport to catch your flight back home.

Unfortunately, the trip is over, but the memory will last forever, and we'll be pleased to help you create new memories and fun times. 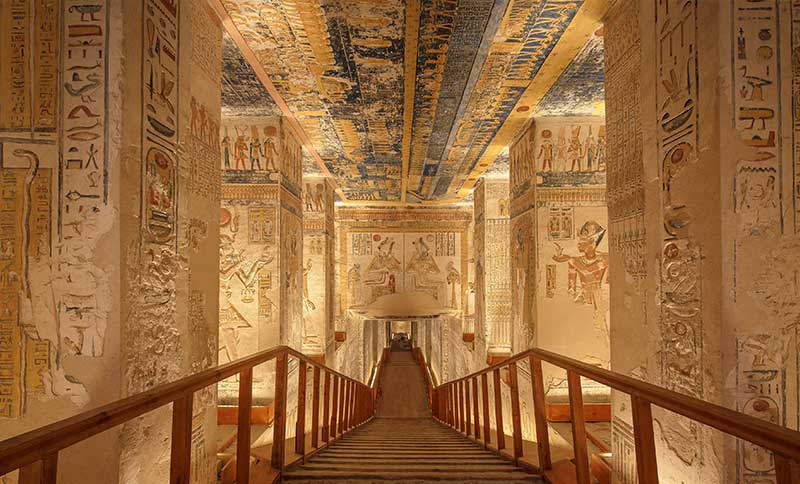