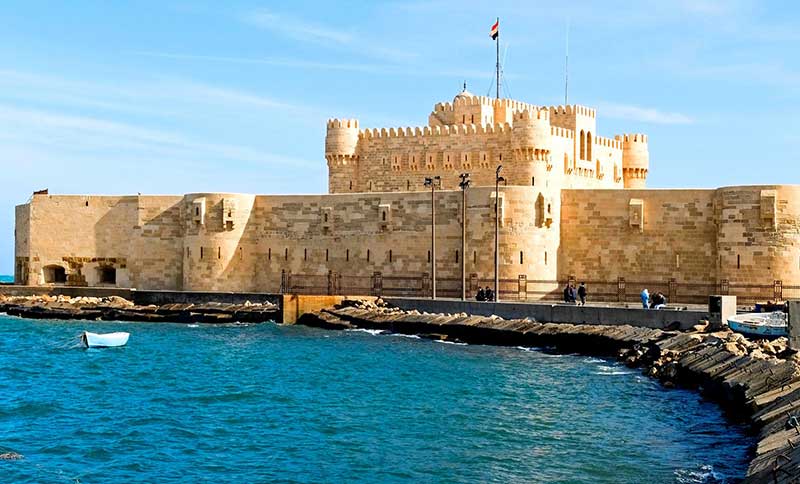 This trip is a quick journey to Egypt’s top 2 destinations.

A 5 days/ 4 night’s trip that has Egypt all-inclusive packages start with Cairo, the current capital, full of history from different eras.

Then Alexandria that was the capital of Egypt built by Alexander the Great, a different spirited City also full of fantastic sightseeing.

Upon your arrival at Cairo, Egypt’s capital, our representative, will be waiting for you to help you through passport control.

Then we’ll take you to the hotel to check-in while enjoying your welcome drink, then sleep tight.

Good Morning, enjoy your breakfast, then get ready.

The Great Pyramids of Giza, the three enormous monuments that age more than 4000 years old, the biggest one is Cheops, named after its founder; it’s almost 150m tall, then another two smaller pyramids, Chephren and Mycerinus. All guarded by the famous noseless Sphinx.

While we are in the area we will visit,Memphis, the oldest capital of Egypt, used to be the seat of power in the old kingdom. The ancient Egyptians called it “Mn Nefer” -means The beautiful Pyramid - and the Greeks gave it its current name.

Then we will head to Sakkara Complex,

where you’ll find another pyramid, Zoser Pyramid or also known as the Step pyramid;it is the oldest pyramid ever built. It was created by Imhotep, the architect.

Then return to the hotel and spend the night.

Have your breakfast, and get ready. We will go from Cairo to Alexandria.

How far is Alexandria from Cairo? Actually not too far, about 3 driving hours, but they are totally different cities. We will start our Alexandria tour as soon as we arrive.

Bibliotheca of Alexandria acted as a major center for science and culture for many centuries. It was rebuilt in the late ’80s of the 20th century in the location of the ancient library.

Citadel of Qaitbay, situated on the eastern side of the northern tip of Pharos Island, built in the 15th century and acted as a defensive fortress.

Montazah Palace, built in 1892 by Khedive Abbas II, it has magnificent gardens overlooking the Mediterranean Sea.

When we finish our tour, we will transport you back to Cairo to have a good night of sleep in the hotel.

Enjoy your breakfast, and let’s not waste time and start the tour.

You’ll start with the Egyptian Museum, the house of more than 100,000 pieces of antiquities, telling stories from ancient times and how the pharaohs lived.

Then you’ll have a tour in Old Cairo, exploring different eras in Egyptian history and visit some of the oldest churches ever established in Egypt.

St Mary church, known with the hanging church, built on a wall of Babylon fortress in dedication to Virgin Mary in the heart of Old Cairo, existing since 692, taking the Basilica style.

St Barbara church, an ancient Coptic architecture masterpiece that was built in the 5th century.

St Sergius and Bacchus Church, the oldest church in Egypt, was constructed upon the crypt of the Holy family where they stayed for three weeks, and it is commonly known as Abu Sarga.

Ben Ezra Synagogue, a quick idea on how the Jews lived in Egypt.

Salah El Din Citadel, built in the 12th Century by Salah El-Din himself the establisher of the Ayyubid dynasty, the government used to rule from it, and you’ll also find Mohamed Ali Mosque. This Islamic architectural masterpiece goes back to the Ottoman Empire.

Our last destination is Khan El Khalili Market, a historical open market where you can take a tour in its old streets and get souvenirs for your friends and family.

Return to the hotel and have sweet dreams.

Enjoy your last Egyptian breakfast, and then check-out. We’ll transport you to the airport to fly back home.

A quick trip but full of historical sites, see you again.

This trip is a combination of history and leisure. Visit the most amazing historical sites in Egypt. Then enjoy the best coastline at Hurghada in... [Read More]