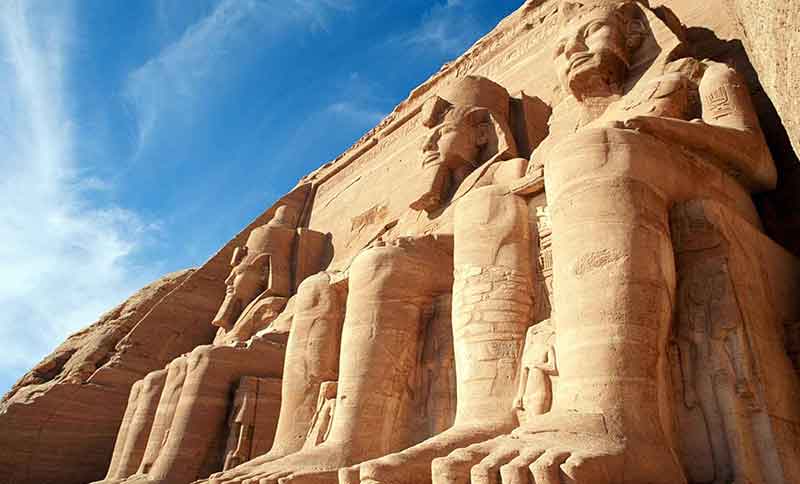 Egypt is a country with great history from different centuries; get ready for a trip to explore the top attractions in Cairo, Luxor, and Aswan, taking it slowly.

The journey will start with two days of full city tour in Cairo, then flying to Luxor to take the cruise to Aswan and back, enjoy sailing in the Nile and the history revealed within.

Welcome to Egypt. As soon as you arrive at Cairo International Airport, you’ll meet our representative to assist you through the procedures.

Afterward, you’ll be transported to the hotel to check-in while you enjoy your traditional welcome drink and have a goodnight.

You’ll depart from the hotel to have your first city tour in the enchanting capital. Get ready to be amazed.

The tour will start with Egypt’s most iconic monument, the Three Majestic Pyramids. They lay at Giza Complex; they were built by Kings Cheops, Chephren, and Myckerinus, and guarded by the Sphinx.

After that, you’ll drive to an even more ancient site, Memphis, the first capital even in ancient Egypt.

Then going to Sakkara Complex, where the first trial of building a pyramid, not like the ones you have seen before but a “Step Pyramid” built by King Djoser.

That was too much history for one day, time to go to the hotel and have some rest.

Good morning. Another city tour is waiting for you, get ready.

Start today’s tour with the Egyptian Museum; it is the only museum in the world that is dedicated to only one civilization; it houses more than 100,000 pieces of original antiquities presenting the ancient Egyptian civilization.

Time to go to a different period in Egypt to the Islamic Period, you’ll visit Salah El Din Citadel that was named after its establisher; he built it to act as a defensive fortress in the 12th century. You’ll find Mohamed Ali Mosque built in the same area but later in the 19th century.

You’ll end the tour in the 14th century’s Khan El Khalili, the historic open market built in the heart of Old Cairo.

After getting what you want from souvenirs from the market, you’ll drive back to the hotel to rest after this long tour.

You’ll check-out from the hotel in the morning to be transferred to Cairo Airport to take the flight to Luxor.

You’ll find our representative waiting for you at Luxor airport to transfer you to the Nile Cruise to check-in.

You have a free day at Luxor to relax and explore the city, maybe take a walk in the Souq (market).

Meals will be served on the cruise, so go back for dinner. Goodnight.

After enjoying your tasty morning meal on board, depart to explore the West Bank of Luxor.

The Valley Of The Kings, which is known as the valley of the gates of the kings, it was the major burial site for a period of 500 years for the great Pharaohs of the New Kingdom.

The Temple Of Queen Hatshepsut, taking place beneath the cliff of Deir El-Bahri, beside the temple of Mentuhotep II, that it was modeled after. It took 15 years to build the temple of the Queen; it is considered as her greatest achievement.

The Two Colossi of Memnon, they are twin massive stone statues for king Amenophis III of the 18th dynasty, the only remains of his funeral temple.

You’ll drive back to the cruise for Lunch while you start sailing toward Edfu, passing through Esna Lock.

Enjoy your dinner on board, and have a goodnight.

When you finish eating your breakfast, you’ll depart from the cruise for a visit.

You’ll see Edfu Temple, one of the most preserved temples; it is one of the several temples built during the Ptolemaic Period. The temple is dedicated to Haroeris that was identified by the Greeks as Apollo.

Make your way back to the cruise for Lunch as we continue sailing toward Kom Ombo.

Visit Kom Ombo temple, a very unique double designed temple to dedicate it to two Gods, Haroeris, the falcon, and Sobek, the crocodile. (You can skip this visit on your way back to Luxor)

You’ll continue sailing to the next destination, Aswan.

Have your dinner on the cruise and get some rest.

Welcome to Aswan. Get ready to explore the city’s attractions after breakfast.

You’ll start by visiting the High Dam, which was built between 1961 and 1970 to prevent the flooding of the Nile that caused disasters to Egypt.

Then you’ll visit Philae Temple that was removed to Agilkya Island after building the dam to save it from being submerged.

Return to the cruise for Lunch, and then have some rest.

You have the afternoon free to explore the city on your own; you’ll be your tour guide./p>

Don’t forget your dinner on the cruise.

You’ll have a relaxing felucca ride in the morning around Kitchener and Elephantine islands.

Afterward, you will start sailing back to the North toward Kom Ombo and Edfu.

All the meals will be served on the cruise. Enjoy sailing.

You’ll start sailing first thing in the morning toward Luxor, passing through Esna Lock one more time. Relax and enjoy a full day of sailing.

Breakfast, Lunch, and dinner will be served on board. Have a lovely sailing.

Welcome back to Luxor. Get ready to explore the eastside of Luxor after breakfast.

Start by the Great Temple of Karnak, which took 2000 years to be built; it is a mix of decayed temples, chapels, and pylons near Luxor. Its construction started from the Middle kingdom till the Ptolemaic period.

Then visit the Luxor Temple built by King Amenophis III of the 18th dynasty and later continued by King Ramses II, starting from around 1400 BCE.

Enjoy your meals on board, and have a good rest.

You’ll check-out from the cruise in the morning after breakfast.

Our representative will transfer you to Luxor Airport to catch your flight to Cairo and from there fly back home. Have a safe flight.

An unforgettable trip that includes the exploration of 4 cities in Egypt. All in one. Starting with Cairo, the capital with its various histories from different ages. Then, enjoy a Nile cruise between Aswan... [Read More]

We all have the same sun, giving us warmth and light, but while in Egypt, the sun was treated differently; it was worshipped as a god, and it was where the Great Pyramids Pointing to, without forgetting the... [Read More]

When the sun had risen over humanity, there was Egypt, and then everything came after. This trip is taking you through the most amazing spots in Egypt, where you can witness the greatness of this civilization,... [Read More]