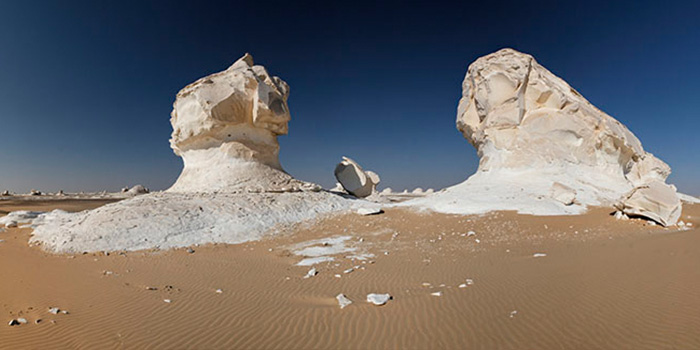 Egypt is full of unique magical places that are so hard to find in other countries. Some are made thousands of years ago, and some are a gift from Mother Nature. Among these gifts are the Oases that lay in the vast desert of Egypt, with their natural springs and outstanding views. Egypt has more than one Oasis; we will introduce you to one of them, Farafra Oasis.

Farafra Oasis lays in the Western Desert of Egypt in the government of Al-Wadi Al-Gadid, which is the largest governorate space-wise. It has a very special location, about 657 km away from Cairo, the capital, 170 Km away from Bahariya Oasis, and 370 Km away southwest of Marsa Matruh and the Mediterranean Sea.

Although Farafra Oasis was mentioned in texts from the Pharaonic era, especially during the 10th dynasty in the 21st BC, there are no noted ancient monuments or archaeological evidence of Pharaonic occupation. It was called "Ana Akhet" in the texts, which mean "The land of the cow" as a symbol of fertility-related to God Hathor.

It is also mentioned in the inscriptions at Karnak Temple that the Libyan Troops used to occupy Farafra Oasis during the dynasty of Merenptah, the son of Rameses II. The only archaeological sites in Farafra dates from the Roman period and onwards only. In the Coptic times, the Copts used to escape from Roman's aggression and go to Farafra Oasis and nearby. 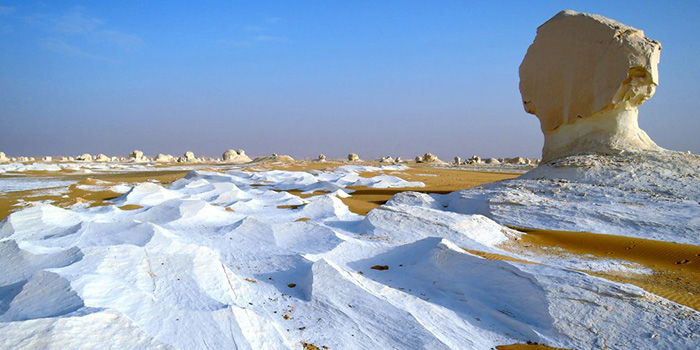 Farafra Oasis and the White desert

Egypt is a country that is full of Oasis, but have you ever wondered how the Oasis is formed? Actually, it can be formed in two ways, either naturally or human-made. It happens naturally when an underground aquifer or river creates enough pressure for water to seep to the surface and form the Oasis. The water can also come from above-ground sources like rain storms or rivers.

One of the most enchanting locations that lay near Farafra Oasis is the White desert, that consists of bizarre white or cream rock formations that look like chalk, taking all kinds of weird shapes like animals or mushrooms. The entire area of the white desert was once covered in Seawater that you can see some seashells located in the rocks. There is a very famous rock that is called "Finger of God" that was created as a result of occasional sandstorms in the area.

Farafra Oasis is occupied by about 20 thousand people, and about 5 thousand inhabitants (2002) mostly local Bedouins. A lot of people in Farafra Oasis either are Senusi or at least have Senusi names due to what happened before the end of the 19th century. There was a Senusi worship site established in Libya and Sudan region; they are a group of Muslim Political-religious system. They emigrated from Libya to Farafra Egypt and remained until the beginning of the 20th century.

I guess you might be wondering about what else you can see in Farafra Oasis beside the white desert. You will visit Qasr Al Farafra, the town within the Oasis, where 5 thousand people live, selling handicrafts and local arts. Don't miss to buy Olive oil. On a hill in the town's center lays the remains of a significant fortress dating from the Roman era. The Oasis is famous for the hot springs, and Farafra's most famous one is called "Bir Sitta," it has a high level of Sulfate that has healing powers. Nearby lays the black desert; its mountains are formed from numerous volcanic small black stones and rocks. On the way, you will also find the Crystal Mountain that looks like crystal, but it is actually Barite.

One of the top attractions of Farafra Oasis is a museum that lays not far away from Qasr El Farafra; it is a mud building like the houses in the medieval area. The museum is made by Mr. Badr Abdel Moghny, a local self-taught unique artist; his art is a depiction of life in Farafra Oasis, his home town. His paintings and sculptures are from sand, stone, and mud; that's what makes them exceptional the most; he also uses unique fossils. The unique aspect of his paintings is that they are so surrealistic in style. Expect to see sculptures of camels, farmers, locals, and the wildlife of Farafra Egypt. Mr. Badr actually exhibited before in the early 1900s in Europe and Cairo as well, and it was a success. It would be a must-visit museum if you went to Farafra Oasis.

The best aspect of the Oasis is the natural water in the water wells. Farafra Oasis has about 100 water wells spread all over it; they are mainly used for aggregation and cultivation of lands. Some are used for swimming and relaxation due to its warm temperature and percentage of Sulfate; the most famous are Bir Sitta (well number 6) and Bir Sab'a (well number 7).

As you can see, you have a few things to do and see in Farafra Oasis, but it is totally worth the visit. You might have limited food choices there, but there are some restaurants in the center of the town, and you can also find locals selling handicrafts and don't forget Olive Oil. The sightseeing and natural aspects of FarafraEgypt, including the groundwater in Farafra Oasis, are what make it unique the most.