Nefertiti, the Queen of beauty: ”Why is Nefertiti so important?”
Queen Nefertiti, the owner of the most famous bust in the world, an icon for beauty and one of the most prominent figures from ancient Egypt. Nefertiti was the Queen of Egypt in the 14th century BC, she was the wife of King Akhenaten, and here we are thousands of years later, almost the entire world knows her, but actually, her life is a mystery we know so little about. Why don't we try to analyze just a few codes from her life, as well as some facts about her and her history?

Nefertiti, one of ancient Egypt's most mysterious and powerful women, reigned with Pharaoh Akhenaten from 1353 to 1336 B.C. and may have controlled the New Kingdom entirely following her husband's death. Akhenaten reorganized Egypt's religious and political structure around the worship of the sun deity Aten during her reign. In 1913, Nefertiti's painted sandstone bust was found and became a global symbol of feminine beauty and power.

One of the biggest mysteries about Nefertiti is her early life; we don’t know about the family she descended from, we don’t know how she met the King, and we are not even sure if she is Egyptian. The Egyptologists had many theories and assumptions about Nefertiti’s early life.
Some say she is the daughter or maybe a niece of Ay, who was a high official in the time of Amenhotep III and also the brother of Queen Tiye, the mother of Akhenaten. Another theory suggests that she was a princess from the lands of Mitanni (Syria). There is nothing certain about the origin of the Queen, no records of her parents or anything before she became the Queen of Egypt.

Nefertiti, whose name means “a beautiful woman has come,” married Amenhotep IV, the son of King Amenhotep III, at the age of 15 before he assumed the throne. When her husband came to the throne, she became the Queen of Egypt and ruled alongside her husband from 1353 to 1336 BC. Queen Nefertiti was more of a co-ruler rather than the King’s consort, they were inseparable in the reliefs, and their love story is still a couple of goals to this day. 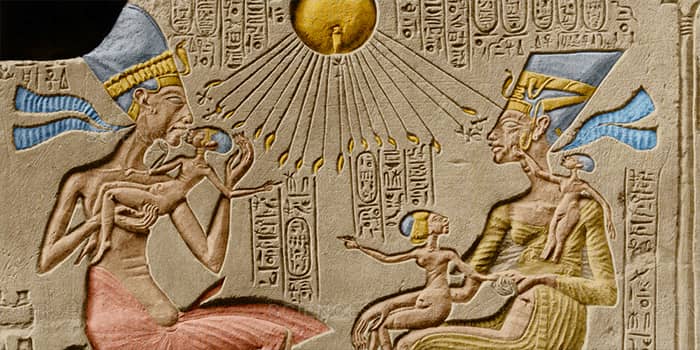 What is Amenhotep IV best known for?

It is time to remove any confusion about her husband since we mentioned two names for him already. Nefertiti married Amenhotep IV; you probably know him by Akhenaten; he is the pharaoh who made a religious revolution during the 18th dynasty in Ancient Egypt. Queen Nefertiti supported him in every step; he changed his name from Amenhotep IV to Akhenaten, and she also did.

What Was Akhenaten Known For?

Akhenaten was the King who introduced monotheism to Egypt; he established the cult of the Sun God Aten and neglected the worship of Amen along with the other deities.

Nefertiti had a prominent rule at that time; she changed her name as her husband did. She named herself “Neferneferuaten Nefertiti,” which means “the beautiful are the beauties of Aten,” she must have really loved her husband to carry such a long name.

Religion was not the only thing that Akhenaten changed in Egypt; a different kind of art was introduced in his era as well. He even changed the capital from Thebes to Akhetaten, a city that he built and was later known as Amarna. The Queen was depicted in a different manner during this period; she was shown in a prominent position of power and authority, leading the worship of Aten, driving a chariot, and even smiting an enemy.

As we said before, the love story of the King and Queen was envious; they wrote romantic poems to each other and ruled together. The lovely couple had six daughters, whom they were usually portrayed with, but they had no sons; at least Nefertiti didn’t but Akhenaten had from other wives.

Akhenaten, Nefertiti, and three daughters:” What happened to Nefertiti's daughters?”

Two of Nefertiti’s daughters became Queens of Egypt later on. One of them married King Tut Ankh Amen, who was the son of Akhenaten from another wife, and Akhenaten married one of his daughters himself. One of her daughters died after her father’s 12th regnal year, and then records of Nefertiti vanished along with three of her daughters.
That’s another mystery from the Queen’s life; we don’t know what happened to her and why there were no records of her after that. As usual, that raised the assumptions between the Egyptologists; they suggest that she outlived her husband and ruled alone as a female king under the name of Smenkhkare before handing the throne to King Tut Ankh Amen. But there were many proofs found that don't support this theory, so we can just say we don’t know what happened to her.

where is Nefertiti Tomb?

Since we don’t know what happened to the Queen, then, of course, they didn’t find her tomb to tell us. Had she died at Amarna? Was she reinterred at the Thebes in the Valley of the Kings? We still got no answers! Some tombs were discovered at the Valley of the Kings that we don’t know their owners yet, but there is no firm proof that any of them belongs to Queen Nefertiti.

In case you are wondering if the tomb of the Queen wasn’t found, then where did they find her famous bust? In 1912, there was an excavation mission led by German archeologists at the area of Amarna. They found the portrait bust of Nefertiti lying in the ruins of the workshop of the sculptor Thutmose, who was known as “The King’s favorite and Master of works.”

Where is the bust of Nefertiti now?

Nefertiti’s bust is not in Egypt; it is at Neues Museum in Germany; since the Germans funded the excavation, they took it with them. The government tried to return it before, but Hitler opposed the idea and said, “I will never relinquish the head of the Queen.” They consider the bust as a symbol of Berlin, and still, no agreement of returning it was made.

Was Nefertiti a good queen?

Queen Nefertiti, as much as we don’t know a lot about her, but we know she was a great Queen, a loyal wife, and a courageous woman who didn’t stand in the shadows. She supported and loved her husband; it is written and drawn on the walls as proof that Egypt once had such a great beautiful queen.