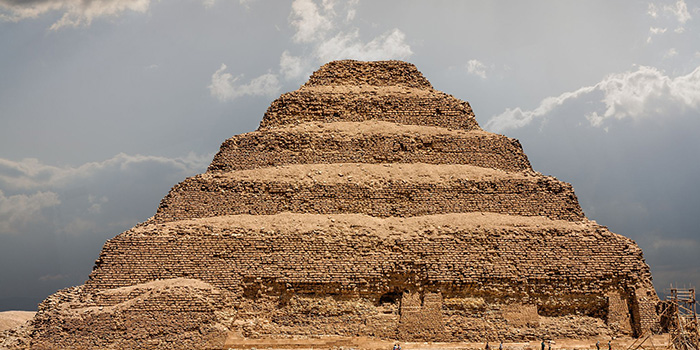 When it comes to Egypt, the oldest of everything is here, as many said: “Egypt came first, then history was written.” And this is vividly obvious in this unique location, Saqqara, Egypt.

It’s a vast necropolis where so many Kings were buried, and also some high ranking responsible and viziers. Tombs there differ from each other, in shape, size, and even the creature who is buried in them.

1st of all the Pyramids

Even though the Great Pyramids of Giza are the most popular worldwide, they are not the oldest. In fact, the first attempt to build a pyramid was here, at Saqqara, and it was called the Step Pyramid, or Djoser Pyramid.

Maybe we are talking now about the oldest building in the history of humankind, it was built in the 27th century BC, by King Djoser, from the third Dynasty.

And was called the Step Pyramid for the six steps, or Mastabas (benches) fixed over each other, forming the Pyramid body, each bench is smaller than the one below it.

Who was the architect of the Step Pyramid at Saqqara?

Such a brilliant design was the idea of Imhotep, who was the King’s chancellor and the high priest of god Ra, the sun. It’s believed that he was the first in history to use columns to support buildings. No wonder after his death he was worshipped as a god by Egyptians.

Ironically, the tomb of the Step Pyramid builder, which was used as a tomb of King Djoser, was never found, even after decades of excavations. Though, the tomb of Imhotep is believed to be somewhere at the Saqqara area, or even somewhere at Djoser’s burial complex, as he was considered as one of the royal family. 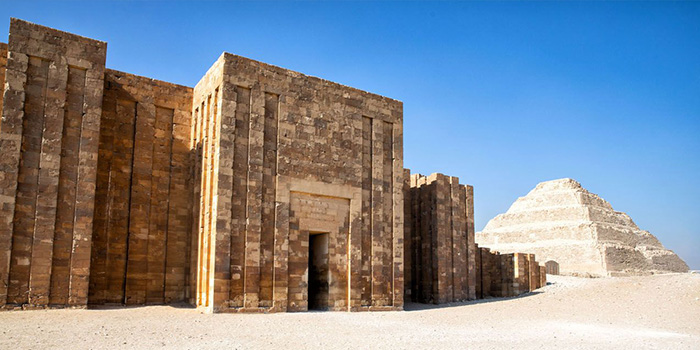 There’s no doubt that the stepped Pyramid is the most famous in this area, but actually, it’s not the only Pyramid there; there are eleven pyramids belonging to some Kings and Queens from different dynasties.

And also there are so many tombs belonging to many viziers and officials. Such as the tomb of Mereruka, who was a great vizier during the reign of King Teti.

Surprisingly, Saqqara wasn’t only for human beings, there’s a cemetery of Bulls, called the Serapeum, where sacred bulls symbolizing the god Apis, were supposed to be buried, but what we have is mainly empty sarcophaguses.

The Saqqara complex was the spark of the age of Pyramids; it was followed by so many attempts to develop the whole idea until they reached the level of wonder by building the Great Pyramids of Giza.