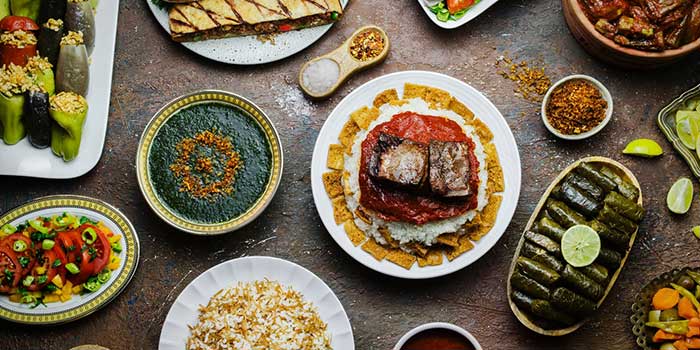 Egyptian Food; Some Peculiar But All Tasty

Food is a vital aspect of any country's culture; exploring the cuisine of a country is as important as exploring the country itself and its history. One of the most major Egyptians' pleasures is eating; we love food! As they say, people eat to live, but we live to eat. That's why Egyptian cuisine is famous with very delicious and mouth-watering food. The Egyptian food may have hard names to pronounce for some, and some of it may seem a peculiar combination of ingredients, but the final taste is hard to find in any other country. Allow me to introduce you to Egyptian cuisine, to know the traditional food, and to have an idea about the most famous Egyptian food.

As the Italians are famous for their pasta and the British are famous for their fish and Chips, the Egyptians are famous for Kushari. It is considered to be the national dish for the Egyptians, although the origin of this meal isn't Egyptian, as they say, that it is originally from India. The origin word for it is from Hindu "Khichri," which is basically a dish made from lentils and rice. The recipe of the Egyptian Kushari is a bit more than that; it has Egyptian Rice, Lentils (brown), pasta with a spicy tomato Chile sauce, the Egyptian touch is mainly in the Middle Eastern spices that we add on the dish, and the final touch that we serve the meal with; fried onions and chickpeas.

The dish is definitely loaded with Carbs; it makes you full very fast at a meager price; that's why it is the traditional dish in Egypt; it is afforded by everyone and makes you full. There are two theories about how this meal reached Egypt all the way from India; some say it happened during the First World War while the Egyptian dealings with Indian soldiers that came along with the British troops in 1914. The other theory says that the British brought it to Egypt in the late 1800s as they colonized India during this period and brought it from there to Egypt. But what we know for sure that this Kushari we currently have with all the touches and spices is totally Egyptian. 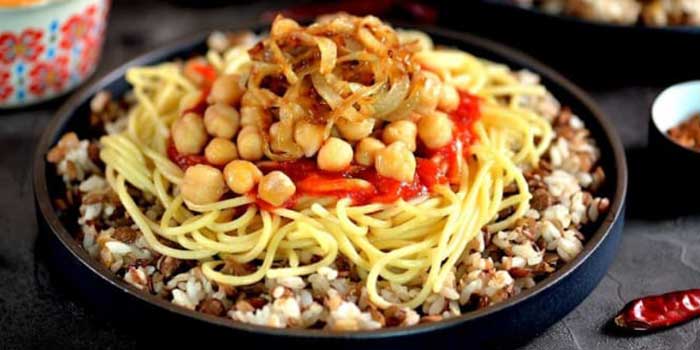 Some countries have famous food that you can find bizarre and impossible to eat, although you find the people of the country so fond of it. Well, Egypt is one of these countries, and this food is Feseekh. If you haven't heard of it before, it is a fermented fish that is really salty and smelly, but we love it! This meal can actually be deadly if not made the right way, as you should bring grey mullet fish, dry it in the sun then submerge it in saltwater for 45 days.

Feseekh is a famous Egyptian food that goes back to the Pharaonic times, as each spring, the receding Nile River leaves behind trails of rotting fish. Feseekh is linked with the Shem El-Nissim holiday, which also dates back to ancient times; it means in Arabic, "smell the breath," a name that actually doesn't really go well with the traditional food of this holiday, which is a very smelly fish. It is best served with brown bread (Baladi), a little oil, a squeeze of lemon, and onions. It might sound like a risky meal, but we love it for a reason we can't really understand, but be careful if you tried it; you might fall for it, and you won't find it in any other country. 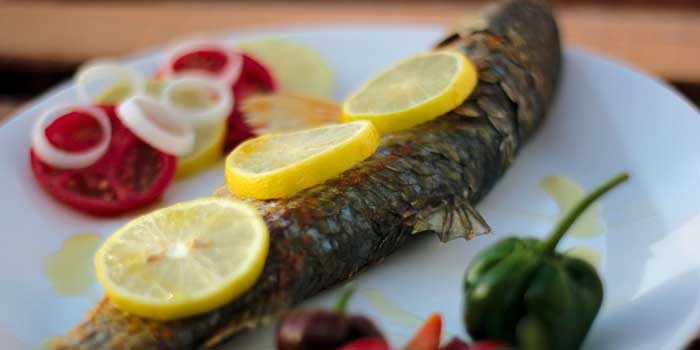 As much as the Egyptians love salty food, we are also fond of the sweet; the Egyptian cuisine is also famous for its deserts. You'll mostly find an Egyptian dessert linked with each occasion we have. When it comes to Ramadan, the holy month that the Muslims fast in is famous with lots of Egyptian desserts like Konafa, Qatayef, Basbousa, and Harisa. These are considered to be traditional Egyptian desserts, but these days they put some modern touches in it to fit the taste of the youth. We add stuff like Red velvet Konafa and Basbosa, Nutella Konafa, Lotus Konafa; we are mixing all sorts of modern food trends with traditional desserts, especially in Ramadan.

And when it comes to the feast that comes after Ramadan, we have Kahk and Ghoriba; the recipe is mainly from sugar, flour, and lots of ghee. We also have Meshabek, which is something like the Indian Jalebi; it's crispy and sweet; we also link it with a holiday. Some of the traditional desserts have a historical background and a story connected to it, like Om Ali, it has a bloody history, but the taste is heavenly. Om Ali was made in celebration of the death of Shajar Al-Dur, a significant woman figure in Egyptian history. She was killed by the maids of the fellow wife of her late husband; her name was Om Ali, meaning the mother of Ali, that's why they named the dessert she invented, after her. 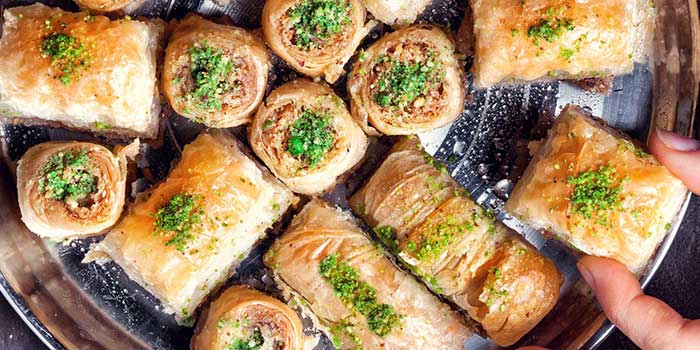 Breakfast is considered to be the most important meal of the day, as you need to be fueled really well for your day. The Egyptian breakfast is not that much of a healthy one, but it is definitely tasty. Most of the Egyptians start their day with the famous fool and falafel. The fool is fava beans mashed with cumin, squeeze of lemon, salt, and your choice of oil; you can also add teheina on it or make it in Alexandrian style with tomato; it's your call. The falafel or Taameya is also made with fava beans, but we turn it into a paste and fry it. It's crunchy from the outside and soft from the inside, just like the Egyptians.

You can add to your breakfast the tasty eggs that are made with lots of ghee, and you can add basterma, which is dried beef, with amazing taste and smell that makes your mouth water. The Egyptian breakfast is best eaten with the traditional Egyptian bread, which is Baladi bread, as we call it. The best part of this traditional breakfast is that you will see all social classes eating it. 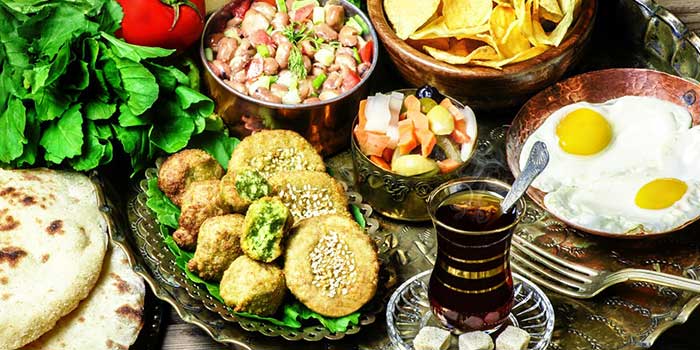 Now that we have talked about the typical traditional Egyptian food, I think you are starting to worry that all we eat is carbs and veggies, but that's not true. If you want to spoil yourself with a stuffed meal with meat, we have got you covered! The Egyptian cuisine is full of all sorts of meat; we have Kebab, which is grilled meat, tastes better than steak even, and kofta, which is minced meat, also cooked on the grill; they are best eaten with Baladi bread and dipped in teheina.

If you want to make the meal even more fancy and traditional, you can drink/eat Molokhya along with the Kebab, you can drink it with a spoon like a soup, or you can dip bread in it and eat it "Wedn Ota'' style, means cat's ear, referring to the shape of bread you dip in the Molokhya. You can also try our stuffed pigeons; it is a pretty ancient meal dating back to 3000 DC; you have two options of the stuffing; rice or freekeh, and both are amazing options.

Now you have an idea about the most iconic foods in Egyptian cuisine, so you don't get lost in translation when you eat in Egypt. You also have an idea about what you should try and what you must try, not to miss a thing because, as I said, exploring the food of a country is part of exploring its culture. Egyptians really love food; you can only know the reason behind that when you try the Egyptian food yourself.