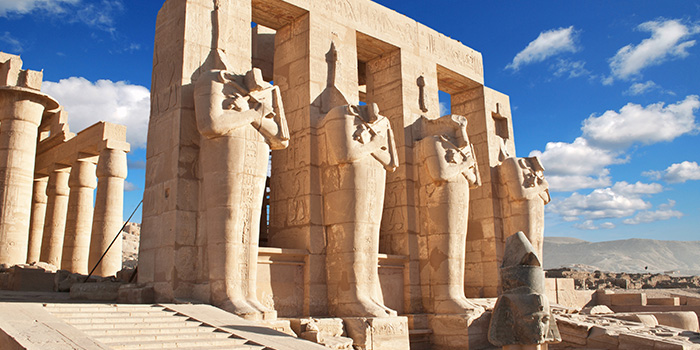 The effect of King Ramses the Great or Ramses II, is vividly noticeable around Egypt. You can find his best masterpiece at Abu Simbel, and some of his prints at Karnak Temple, and of course, you can not miss the Ramesseum.

The Ramesseum is a mortuary Temple of King Ramses II, located in Thebes Necropolis, on the west bank of the Nile in Luxor.

It was built in the 13th century BC, to be dedicated to god Amen and the King himself as a god.

The temple is oriented northwest and southeast, with two stone pylons of 60 m wide. Passing through the second pylon, you’ll be at a courtyard beyond which a covered hypostyle hall was taking place, consisting of 48 columns.

While the first pylon will also lead you to a courtyard, where a huge statue of King Ramses, 19m high and weighing more than 1000 tons, is taking place at the back of it, unfortunately, it’s only fragments of the statue that we have now.

Walls and pylons are decorated with some reliefs, depicting some main events from the King’s life, and mainly in this temple, these reliefs were describing the Battle of Kadesh, one of the King’s greatest victories, or claimed to be. 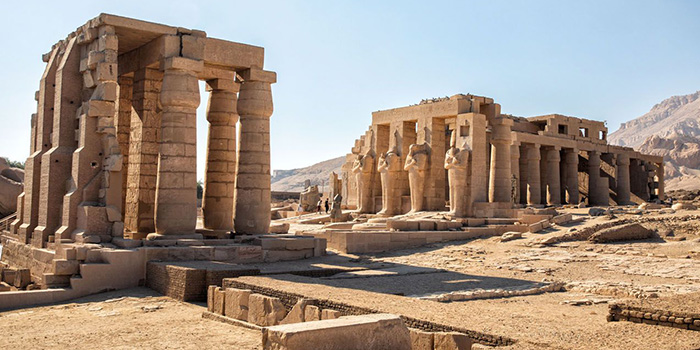 The second pylon has something like a list on it, naming great Kings, showing them honored at ceremonies of the festival of Min god.

It consists of 14 Kings, such as Thutmose III, Seti I, Montuhotep II, and Ramses I.

When the temple was discovered, some valuable documents dating back to the 18th century BC were found, describing some diseases and how to treat them. These ancient medical documents are really proving how ancient Egyptians were steps ahead from any other nation at that time.

Even though what we have now from the Ramesseum Temple is only ruins, it's one of the most important monuments in Egypt and one of the King Ramses’ masterpieces.