A city lays in the south of Egypt, with the Nile passing through, dividing the city into two halves, east, and west. Each bank has its magic and attraction.

It was once the capital during the 18th Dynasty, and now it’s an open museum which is showing the great history of our ancestors, now called Luxor.

Luxor Location, how far is Cairo from Luxor Egypt?

The name itself has a history, the Egyptians were calling it Waset, which means the city of Scepter, and when Greeks were ruling Egypt, they called it Thebes like a city in their home.

Then the Arabs came and took control over the country, and when they saw all these temples, they called it Luxor, which means Palaces or Castles, as these temples seemed to be like castles for them.

It’s one of the oldest cities in the world, precisely more than 3000 years ago, but the importance of the city started during the age of the new Kingdom.

It all had started while Egypt was under the reign of Hyksos, foreigner invaders who were ruling the north of Egypt for more than a hundred years—from where resistance had been aroused, led by Ahmos.

And from the 18th Dynasty to the 20th Dynasty, it was the capital of Egypt, the religious center, and where the military based, for instance, it was the beating heart of the country.

The open Museum, What are the best places to visit in Luxor?

Monuments and temples are divided on the two banks of the Nile, west and east bank.

Starting with the west bank:

Valley Of The kings

Or Valley Of The Gates Of The Kings, a large cemetery of Kings and nobles, dated back to the new Kingdom. It has some tombs of great Pharaohs; unfortunately, most of them were robbed a long time ago, but a few had kept their treasure, and they are outstanding.

Such as the famous tomb of King Tut Ankh Amen, which had given a celebrity to a kid King who hadn’t done anything impressive during his lifetime. 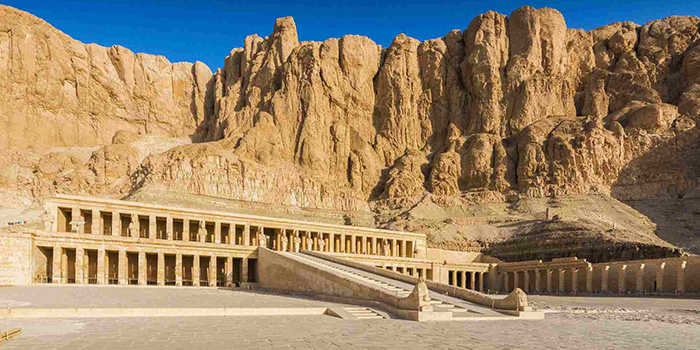 Valley Of The Queens

It was the same as the valley of Kings but for the Kings’ wives. Like the wives of Ramses I, Seti I, and Ramses II.

Also, some Princes & Princesses who were buried beside their mothers, like “Ka Em Waset,” King Ramses II son.

This temple has a unique location at a place called Deir El-Bahari, beneath the cliffs. It was a mortuary temple for the Queen.

Hatshepsut was the first woman to rule a nation in history, she wasn’t just the King’s wife, and she had full control over the throne. Until her stepson, Thutmose III had taken the throne back by force.

The temple has a design that catches the eye, as it was designed by a brilliant engineer whose name is Senmout. There were a lot of rumors that he wasn’t only the special engineer of the Queen, but it’s believed that they had a deeper relationship as two lovers. 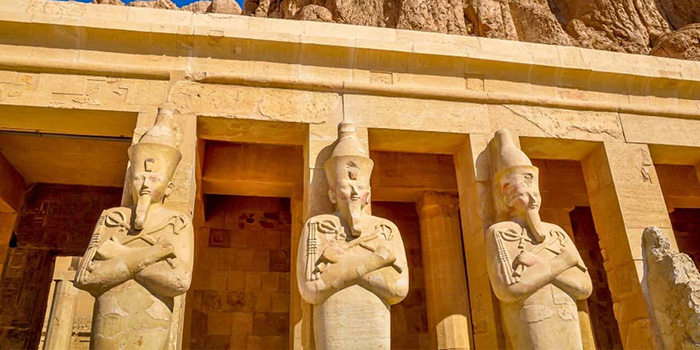 Two huge stone statues are depicting King Amenhotep III that it’s believed they were a part of a destroyed temple.

These statues were made of quartzite sandstone, which was quarried from El Gabal El Ahmar, a place near modern Cairo now, and it had transported overland, as these stones are too heavy to be carried by the Nile.

Moving to the east bank:

This is not just a temple existing from a long time ago; it’s a history by itself. The construction of such temples had taken 2000 years; it was where the Kings from different periods and dynasties were leaving their marks to be remembered.

The Karnak Temple idea started during the reign of King Sensurt I from the Middle Kingdom, and a lot of successive kings, such as King Ramses II, who was leaving his prints everywhere, and Queen Hatshepsut and a lot more till the Ptolemaic period.

No wonder it’s the second highly visited monument in Egypt after the Great Pyramids Of Giza.

Amenhotep III of the 18th Dynasty built it, and some parts were added later on in the 19th Dynasty by King Ramses II.

It wasn’t made to worship a god; instead, it was dedicated to the rejuvenation of Kingship, it’s believed that many Kings were crowned in this temple.

During the Roman era, some buildings were added, and then a part of it was transformed into a church later after. 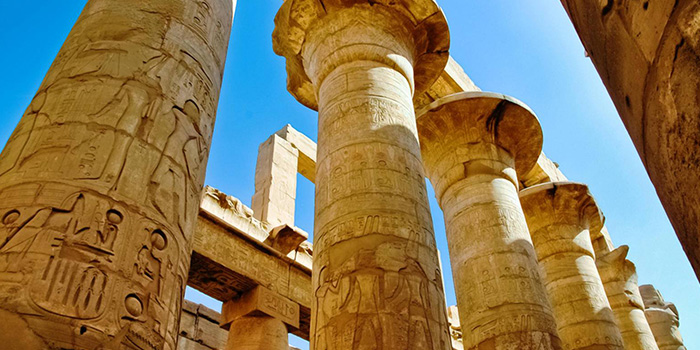 It was opened in 1997, showing the different processes of Mummification and embalming with the used techniques and materials. And exposing a lot of mummies of Pharaohs, and also some animals.

Why should you visit Luxor, Egypt?

Like all the ancient Egyptian cities, a visit is priceless, and of course, Luxor has a priority as it’s the most city full of monuments and history in Egypt and maybe in the whole world.

How to get there? And where to stay in Luxor?

From Cairo, there’re two ways to reach Luxor, of course, the first and best way is taking a flight from Cairo to Luxor directly, as the city has an international airport.

The second way is by train, a sleeper train from Cairo to Luxor, it takes all night traveling to reach the destination by the morning. It could take a lot more time, but it’s affordable for anyone.

And also you can still go there driving or by bus, but it would take much more time, and it’s so exhausting and not recommended at all.

Accommodation in Luxor is so unique; the most popular is staying on a Nile cruise and hop off to do the visits then hop on again to move to another destination.

Although Luxor is full of hotels with different ratings so it could suit everyone.

It has a desert climate, like all Egypt. It reaches its highest temperature during July and August, while in winter it’s usually quite good weather.

It’s believed that third of the world heritage from monuments and artifacts are already existing in Luxor, which explains why it’s considered an open museum.

This city combined the stories of great people who were building an irresistible civilization that had lasted for thousands of years, and their ancestors living there at present, and continuing to write the great history of this city.

There’s only one way to get these stories, is by visiting Luxor.