Deir El Bahri, the place that is famous for the temple of Queen Hatshepsut that lays at its cliff, but not a lot knows that it is part of the Theban Necropolis. It has several mortuary temples and tombs; it is located on the west bank opposite Luxor City. It actually means in Arabic, the Northern monastery, referring to the monastery that was built there in the 7th century BC by Mentuhotep II of the 11th dynasty, he was the first Pharaoh to build his mortuary temple on this site, followed by Amenophis I and Hatshepsut during the 18th dynasty. 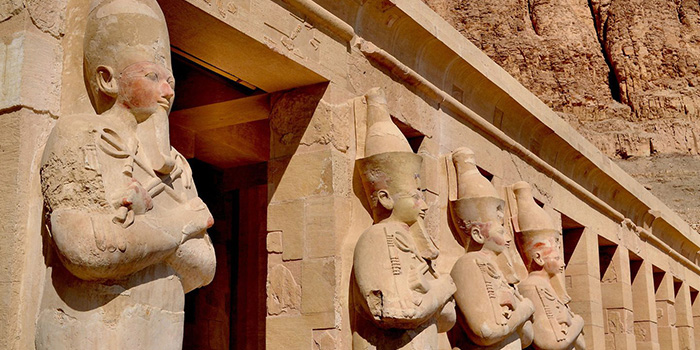 Hatshepsut, an Egyptian princess, her father was Thutmose I, who was a general, but as the Pharaoh before him didn’t have a son, he became the Pharaoh. After her father’s death, she married her step-brother Thutmose II, which was a normal thing back then to keep the royal bloodline pure. Then after 15 years, her husband died, Hatshepsut didn’t have a son, only a daughter named Neferure, but Thutmose II had a son from a concubine that was the male successor, Thutmose III.

Hatshepsut served as the regent of Thutmose III since he was just an infant; she remained only the Queen for a while. Then for some unclear reasons, she claimed the role of the Pharaoh, she referred to herself as the “Lady of the two lands.” She portrayed herself in a male picture with a male body and a false beard. She also claimed to be the daughter of god Amun and that he meant for her to take charge of Egypt.

Hatshepsut is considered to be the second historically confirmed female Pharaoh of Egypt; the first known one is Sobekneferu; she ruled for four years. Hatshepsut, as a word, means the foremost of the noblewomen; they gave her a name that really did fit the history she made.

Although Hatshepsut didn’t follow her father’s footsteps in going to war, she preferred establishing trade relationships with countries during her reign. One of her great achievements is that she authorized a trading expedition that brought ivory, ebony, gold, and leopard skins from a distant land called Punt. Her greatest achievement ever was her temple that is located at Deir El Bahri; it is one of the architectural wonders in ancient Egypt .

The history of the temple

The famous temple of Queen Hatshepsut took 15 years of construction; the Queen ordered building it in 1479 BC during the 18th dynasty, she decided to build it to tell her story. The temple is also known as Djeser-Djeseru, means “The Holiest of Holy”; it is considered not only the Queen’s greatest achievement but also the greatest ancient Egyptian achievement.

The temple was modeled after the temple of Mentuhotep II, but on a much larger scale and it is actually different in many ways. The architect behind the construction of the temple was Senenmut, the Queen’s chancellor and royal architect; there are some sayings that he was the Queen’s lover as well. His secret tomb lays at the cliff of el Deir El Bahri, but it wasn’t finished, and he wasn’t interred there.

The Queen Hatshepsut temple stands in Upper Egypt, beneath the Cliff of El Deir El Bahri, 17 miles in the northwest of Luxor, the great capital of Egypt during the New Kingdom. It marks the entrance of the Valley of the Kings and behind the mortuary temple of Mentuhotep II.

The Queen’s temple stands for over 3500 years; it is definitely a great achievement, even though parts of it were destroyed by the falling of rocks from the cliff, but it is still in good shape. It used to be the house of two statues of Osiris, the god of fertility, afterlife, agriculture, and the dead; he is believed to be the brother and husband of Isis. The temple will always be one of the greatest ancient Egyptian temples; it is a must-see when in Luxor, as well as Luxor temple and Karnak temple. 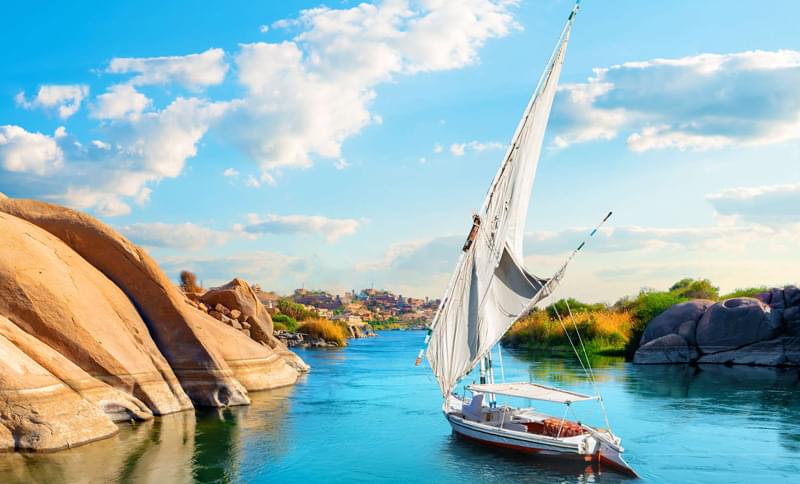