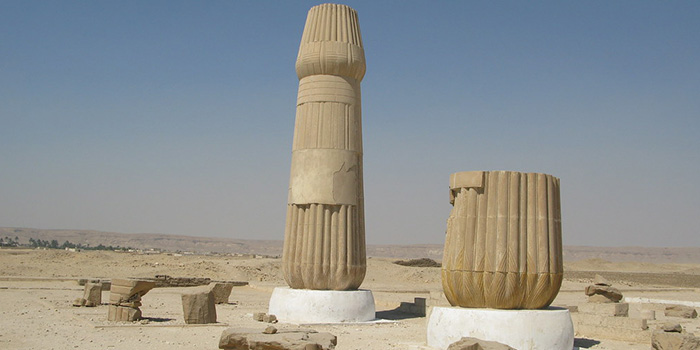 Tell El Amarna is the only Egyptian ancient city that preserved great details from its internal plan. Its name comes from the Beni Amran tribe that lived in the region, but the ancient name of the city was Akhetaten. The name of the city in ancient Egyptian meant “Horizon of the Aten,” the name was in dedication to god Aten, the god unique Akhenaten worshiped.

Where it is Located

The location of the ancient city of Tell El Amarna, is on the East Bank of the River Nile, in Minya, a modern Egyptian province; it’s about 58 km in its south, which is about 312 Km south of Cairo and 402 Km North Luxor. It was a new site back then.

What is Tell El Amarna

Tell El Amarna, is the remains of the newly established capital city that was built by the Egyptian Pharaoh Akhenaten of the late 18th dynasty. The city was built around 1348 BCE and shortly abandoned after the death of its establisher by four years by his son Tut Ankh Amen, who returned the capital to Thebes. Akhenaten built it when he abandoned the worship of Amen and devoted himself to Aten.

Akhenaten had a different belief at that time; he was the Pharaoh who introduced monotheism to the Egyptians. He closed the temples, abolished the ancient Egyptian religion, and imposed his own vision, which affected the economy badly. Akhenaten built this new capital for his vision, but his son Tut Ankh Amen –as a little boy, influenced by Amen clergy -rejected it after his father’s death, and returned to Thebes and the traditional religious practices. The city was later destroyed by the Pharaoh Horemheb, who wanted to erase Akhenaten’s name and accomplishment from history.

The Pharaoh Akhenaton started the construction of the city around the 5th year of his region and was completed probably around his 9th year, but it seemed that it became the capital two years earlier. It took about four years to build, to speed up the process they used mud-brick and whitewashed in the construction, and the most important building was faced with local stone. An excavation that was made implies the possibility that children, youth, and teenagers built the ancient city.

The city of Tell El Amarna was designed into four main districts; the North, where the royal family lived to the rear of the palace, the northern palace where they received guests, and Aten was worshiped. The central city that was designed around the great and small temples of Aten, the administrators lived and worked there. The Southern suburbs, where the wealthy elite lived, there Villa’s were only one floor, unlike in Thebes. And the Outskirts where the peasant farmers lived. There was a very common feature in the buildings of Akhetaten that it had no roof.

In 1887 CE, a local woman digging for fertilizers discovered Cuneiform tablets at Akhenaten, they are official documents and correspondence between kings of Egypt and foreign nations, from the so-called Amarna period. This period created a great debate between the modern-day scholars, as some say that Akhenaten’s attention went to the problems that serve his personal interest only and that he disregarded anything other than his religious reforms and life in the palace. Some of the letters discovered served this point of view, but others serve the opposite, we can’t really tell which is true.

Akhenaten and his wife, Queen Nefertiti, created a period of revolution in the history of Egypt, from religion and arts. As the Amarna period was known for a revolutionary style of art, especially in portraying loyalty, it included intimate royal moments and distorted body shapes. Akhenaten's last years are a mystery, and after two rulers, who didn’t stay for long, his son Tut Ankh Amen who was named first Tut Ankh Aten, ruled Egypt. King Tut abandoned everything his father made; he returned to Thebes and went back to worshiping Amen.

The following Pharaohs tried to erase Akhenaten from history; they even removed his name from the Pharaoh's lists. They destroyed the ancient city of Tell El Amarna; they wanted to restore things to how they used to be before the Amarna period.